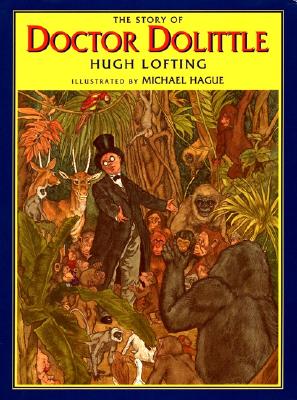 The Story of Doctor Dolittle

When a swallow arrives in Puddleby-on-the-Marsh with the news that the monkeys of Africa are ill and only the doctor who talks with animals can save them, Doctor Dolittle and such good friends as Jip, his loyal dog, and Dab-Dab, his housekeeper duck, face their greatest challenge. Together they must sail to Africa, battle a band of cutthroat pirates, flee across a gorge on a bridge made of acrobatic apes, and convince the king of the beasts that even he must help an animal in need. With nearly fifty full-page pictures from Michael Hague and the McKissacks artful reworking of the dilemma faced by Prince Bumpo, this treasured story is now available in a deluxe edition that all families will want to explore again and again.

Hugh Lofting (1886-1947) began what became the Doctor Dolittle stories while writing letters to his children from the front during World War I. The Story of Doctor Dolittle, first published in 1920, was followed by The Voyages of Doctor Dolittle, which was awarded the Newbery Medal, and ten more popular books in the series.

Michael Hague has illustrated more than thirty children's classics, including memorable editions of The Wizard of Oz, Alice's Adventures in Wonderland, Peter Pan, The Wind in the Willows, and The Secret Garden. He is also the artist of several bestselling books by his wife, Kathleen, including Alphabears, Numbears, and Ten Little Bears. The father of three grown children and the grandfather of four, Michael has a ready audience for all of his work.

Peter Glassman is the owner of Books of Wonder, the New York City bookstore and publisher specializing in new and old imaginative books for children. He is also the editor of the Books of Wonder Classics, a series of deluxe facsimiles and newly illustrated editions of timeless tales. And he is the author of The Wizard Next Door, illustrated by Steven Kellogg. Mr. Glassman lives in New York City.
Loading...
or
Not Currently Available for Direct Purchase