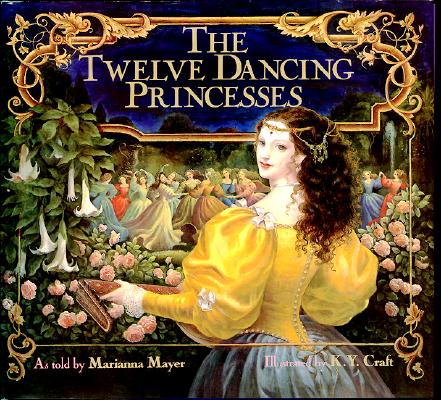 For generations, children have loved the enchanting story of the twelve beautiful princesses and the handsome young lad who solves the mystery of their tattered shoes.

Now Marianna Mayer brings to life all the splendor and romance of this beloved classic, from the dazzling forests Of silver, gold, and diamonds to a twilight palace where the bewitched princesses dance to hypnotic music. And award-winning artist Kinuko Craft add, her own magic: a visual feast of exquisite, jewel-like paintings that sweep across the pages.

Together, Mayer and Craft have created an unforgettable world that readers of all ages will want to return to again and again.

"I see folktales and myths as humankind's first stories," says Marianna Mayer. "They are a kind of collective dreaming, filled with timeless symbols and images we can all relate to, regardless of age or culture. And, much as an oyster must be disturbed by a grain of sand in order for the pearl to be created, I often choose to retell stories in which I find unresolved fragments that are somehow perplexing to me."

Though widely known as a children's book writer, Marianna Mayer's early education focused on visual art. "It seems to me there was never a time when I didn't want to be an artist, " she says. "I liked to tell stories with pictures and compose music. My sister and I put on plays made up from my stories. And then I decided to start writing a book, at the age of nine." She published her first book at the age of nineteen. After college, she studied painting at the Art Students League in New York City. Her experiences as an artist provided many images that she began to incorporate into writing. Gradually, she shifted to the written word as a medium of expression. She explains, "I began to feel more freedom when using words as my paints and plots as my canvases.

"While in the midst of a writing project, I live so much in my mind that what takes place in my imagination becomes quite real to me. I try to become part of the culture of a particular tale as much as possible. While working on Baba Yaga and Vasilisa the Brave, for example, I read all I could about Russia. What I learned about Slavic mythology helped to deepen my understanding of the story. I listened to Russian music, ate Russian food (which I love!), and tried in other small ways to enter into the essence of that culture."

"My writing is deeply personal. First and foremost I write for the child who still lives within me. Then to the child in others, whether that child resides in a young person or an adult. I'm striving to reach out to that spirit of wonder within us all. The stories I was told as a child, those half-remembered folktales and myths, have become the foundation for what I continue to work on in my books. The sense of hope that books instilled in me as a child saw me through many difficult times. Because of this, I choose characters who face overwhelming odds but triumph through courage and perseverance. Similarly, myth allows a child to believe in his or her own dreams and can instill a boundless hope for the future."