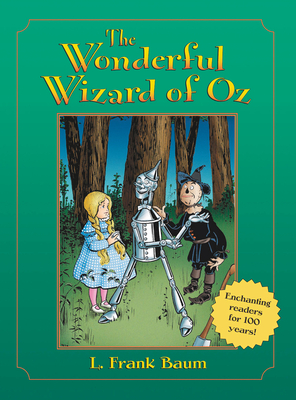 Journey to the spectacular land of Oz with The Wonderful Wizard of Oz! This classic tale from L. Frank Baum has enchanted readers for over a century.

With this paperback edition featuring the original illustrations by W.W. Denslow, new readers will learn the power of the phrase “There is no place like home.”

Follow the adventures of young Dorothy Gale and her dog, Toto, as their Kansas house is swept away by a cyclone and they find themselves in a strange land called Oz. Here she meets the Munchkins and joins the Scarecrow, Tin Woodman, and the Cowardly Lion on an unforgettable journey to the Emerald City, where lives the all-powerful Wizard of Oz.

W[illiam] W[allace] Denslow was born in Philadephia in 1856. Famous for his bold, colorful illustrations for many popular turn-of-the-century children's books, he is best remembered today as the original illustrator of The Wonderful Wizard of Oz.

Peter Glassman is the owner of Books of Wonder, the New York City bookstore and publisher specializing in new and old imaginative books for children. He is also the editor of the Books of Wonder Classics, a series of deluxe facsimiles and newly illustrated editions of timeless tales. And he is the author of The Wizard Next Door, illustrated by Steven Kellogg. Mr. Glassman lives in New York City.
Loading...
or support indie stores by buying on
(This book is on backorder)