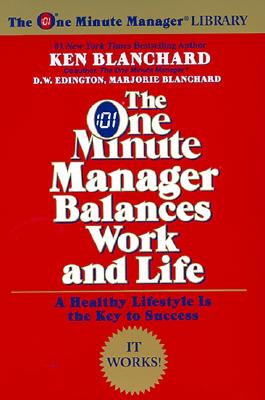 The One Minute Manager Balances Work and Life (Paperback)

This is the story of a One Minute Manager who was so successful in every way that he forgot one important thing: He forgot to stay physically fit. He was so much in demand that he ate on the run, didn't take time to exercise, and all the while saw his weight balloon and his breath grow shorter. He soon discovered success in business was endangering his health. His life was out of balance.For all those busy, achieving people with overcrowded schedules, here is a useful blueprint that shows how to manage stress and make a lifetime commitment to fitness and well-being. By following four important strategies for balancing a complicated life, everyone can get their bodies back into shape and their lives into proper perspective. The One Minute Manager Balances Work and Life offers a way to achieve not only a new, healthier style of living but increased productivity as well. For the millions of readers of Ken Blanchard's bestselling books--including Raving Fans and Gung Ho!--here's invaluable advice for getting the most out of life.

Ken Blanchard, chairman of The Ken Blanchard Companies, is the co-author of The One Minute Manager and eleven other bestselling books. His books have combined sales of more than 12 million copies in more than 25 languages. He lives in San Diego, California.

Dr. Edington is the author and coauthor of numerous articles and books, including The Biology of Physical Activity (with V. Reggie Edgerton) and Frontiers of Exercise Biology (with Katarina Borer and Tim White). His work with the Health Risk Appraisal and corporate health evaluation programs is considered to be the model for cooperate development plans in the wellness area.