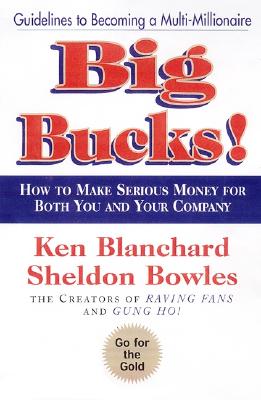 With Big Bucks! bestselling authors Ken Blanchard and Sheldon Bowles unlock the secrets of making serious money for both you and your company. Through a series of easy-to-follow steps and powerful strategies, Blanchard and Bowles show how anyone can create lasting wealth. By focusing on concepts like commitment, intensity, purpose, and even fun, the authors have crafted a totally new--and irresistible--paradigm for unlimited success.

Written in the parable style of their previous books, Raving Fans and Gung Ho!., which were Business Week, New York Times, and Wall Street Journal business bestsellers, Big Bucks! introduces Len, who doesn't just want more money--he wants to be a millionaire. Under the direction and guidance of a group of mentors, Len must overcome three challenges on his way to attaining more wealth than he ever dreamed possible. Len learns that these three tests can be undertaken by any individual or organization in the pusuit of big bucks. And he also sees that while making big money, he can accomplish even more valuable achievements by being generous with his time, talents, and prosperity.

Packed with practical advice, Big Bucks! is a must-read for any individual or business professional seeking wealth. It's destined to become one of the major money books in the twenty-first century.

Sheldon Bowles lives in Winnipeg, Canada, and is president of Ode to Joy Limited, chairman of Precision Metalcraft Inc., and an associate of the Exchange Group. A noted speaker, author, and businessperson, he serves on several boards and is currently busy with new projects: a chain of full-service car washes and three forthcoming books, High Five!, Kingdomality, and Road to Riches, all coauthored with Ken Blanchard.