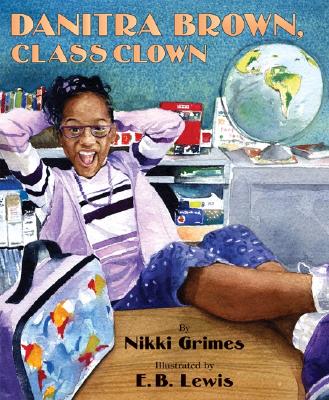 They may be best friends, but Zuri Jackson and Danitra Brown respond very differently to the start of school. For Zuri, there are so many things to ponder -- a new teacher who replaced the old one she liked so much, passing math, and worrying about her mother's health. But for Danitra, the only real deal is being true to herself, having fun, and supporting Zuri in any way she can.

Multiple Coretta Scott King award winners Nikki Grimes and E. B. Lewis have poured their best into Danitra Brown, Class Clown. This third book starring Zuri and Danitra speaks to everyone who has faced the trials of a new school year.

“A must-buy for all libraries and a must-read for all Danitra and Zuri fans.” — School Library Journal (starred review)

In 2017, Nikki Grimes was honored by the American Library Association with the Laura Ingalls Wilder Award in recognition of her substantial and lasting contribution to literature for children.

She lives in Corona, California.

E. B. Lewis has won several awards for his magnificent illustrations, including a Caldecott Honor for Coming On Home Soon by Jacqueline Woodson and a Coretta Scott King Honor for Talkin' About Bessie by Nikki Grimes. E. B. Lewis teaches illustration at the University of the Arts in Philadelphia and lives in Folsom, New Jersey.