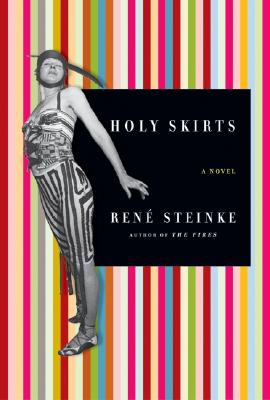 In 1917 no one had ever seen a woman like the Baroness Elsa von Freytag-Loringhoven. She regally stalked the streets of Greenwich Village wearing a bustle with a flashing taillight, a brassiere made from tomato cans, or a birdcage necklace; declaimed her poems to sailors in beer halls; and enthusiastically modeled in the nude for artists such as Man Ray and Marcel Duchamp, setting the city ablaze with her antics. Before today's outsized celebrities, there was the Baroness -- poet and artist, proto-punk rocker, sexual libertine, fashion avatar, and troublemaker. At the center of the Dadaist circle, the Baroness transformed herself into a living, breathing work of art.

Holy Skirts is a vivid imagining of the Baroness's story. Beginning in 1904, with Elsa's burlesque performance onstage in Berlin's Wintergarten cabaret, the adventures continue across Europe, through turbulent marriages and love affairs, until the Baroness finally lands in New York City, just before America enters the war. As she befriends Greenwich Village artists and writers, she defines herself as a poet, even as she breaks the bonds of female propriety.

In a beautifully written novel, René Steinke paints an exquisite portrait of this woman and her time -- an era of cataclysmic change that witnessed brutal war, technological innovation, the rise of urban living, and an irrevocable shift in the lives of women, who, like Elsa, struggled to create their own destinies. Holy Skirts is a celebration of resilience and imagination, anexploration of the world in which the modern woman was born, and a testament to the lost bohemia.

“Steinke shows palpable admiration and respect for her proto-feminist protagonist. This is an intelligent, spirited work that stimulates interest in the baroness’s work and times.”
— Publishers Weekly

“Steinke is a consummate prose stylist. She has a poet’s ear for words....”
— BookForum

“Steinke’s graceful prose adds intimate texture to a woman so cutting-edge that Duchamp called her ‘the future.’”
— Entertainment Weekly

“Steinke’s book reminds us why Elsa’s frenetic, avant-garde world is worth remembering.”
— Time Out New York

“Steinke has drawn a fully realized character whose Dadaist impulses, even though the filter of time and fiction, still startle.”
— Chicago Tribune

René Steinke is the author of The Fires. She is the editor in chief of The Literary Review and teaches creative writing at Fairleigh Dickinson University. She lives in Brooklyn, New York.