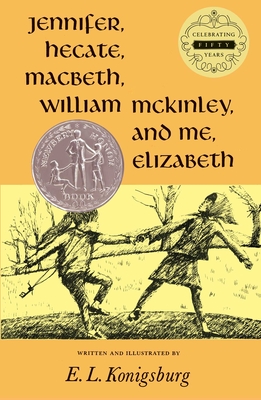 2017 marks the fiftieth anniversary of the beloved classic Jennifer, Hecatate, Macbeth, William McKinley, and Me, Elizabeth.

Elizabeth is an only child, new in town, and the shortest kid in her class. She’s also pretty lonely, until she meets Jennifer. Jennifer is...well, different. She’s read Macbeth. She never wears jeans or shorts. She never says “please” or “thank you.” And she says she is a witch.

It’s not always easy being friends with a witch, but it’s never boring. At first an apprentice and then a journeyman witch, Elizabeth learns to eat raw eggs and how to cast small spells. And she and Jennifer collaborate on cooking up an ointment that will enable them to fly. That’s when a marvelous toad, Hilary Ezra, enters their lives. And that’s when trouble starts to brew.

Praise For Jennifer, Hecate, Macbeth, William Mckinley, And Me, Elizabeth…

"An entertaining tale that has staying power."