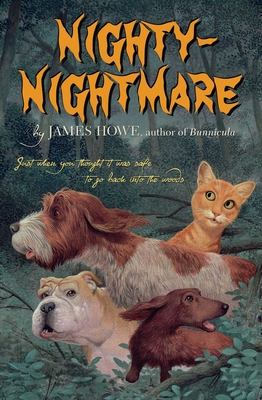 An overnight camping trip! Not Harold's idea of fun. Too many mosquitoes, ticks and cockleburs. But when the Monroe family set out, their faithful dog Harold was with them, mostly because he remembered that camping could also bring s'mores and toasted marshmallows. Howie, the other family dog, and Chester the cat were also included in the trip. Only Chester thought the idea was completely insane. The woods, he informed Harold, were not only full of cockleburs and ticks, but of spirits, evil spirits who prey on the innocent. And on this, the worst night of the year -- St. George's Eve, when all spirits are set loose -- who knew what could happen.
What Harold knew was that Chester was a well read, over-stimulated cat, full of weird ideas. He did not take Chester's worries too seriously. He had s'more to think about. But then, the Monroes set up camp near two strange men and their even stranger dog, and things began to happen that made even Harold wonder. Could Chester be right?
This begins a long night, full of terrors and alarms, full of Chester's horrifying tale of how Bunnicula, the vampire bunny, was born and came to America, full of storms and a total sense of danger; and at the end came surprises that even Chester could not have predicted.
Once again, the Monroe family may be the victims of evil forces or only of Chester's strange imagination. But whichever, the result is suspenseful and very, very funny.

Praise For Nighty-Nightmare (Bunnicula and Friends)…

James Howe is the author of more than ninety books for young readers. Bunnicula, coauthored by his late wife Deborah and published in 1979, is considered a modern classic of children’s literature. The author has written six highly popular sequels, along with the spinoff series Tales from the House of Bunnicula and Bunnicula and Friends. Among his other books are picture books such as Horace and Morris but Mostly Dolores and beginning reader series that include the Pinky and Rex and Houndsley and Catina books. He has also written for older readers. The Misfits, published in 2001, inspired the nationwide antibullying initiative No Name-Calling Week, as well as three sequels, Totally Joe, Addie on the Inside, and Also Known as Elvis. A common theme in James Howe’s books from preschool through teens is the acceptance of difference and being true to oneself. Visit him online at JamesHowe.com.
Loading...
or
Not Currently Available for Direct Purchase