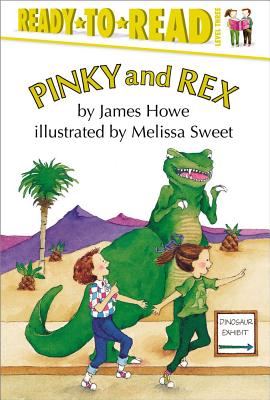 Pinky and Rex are the best of friends, but a trip to the museum with Pinky's dad and his sister, Amanda, puts their friendship to the test. When Pinky, whose favorite color is pink, and Rex, who loves anything to do with dinosaurs, set their sights on the very same stuffed animal at the museum gift shop, it takes a little wisdom and some help from an unexpected source before the matter is neatly sorted out.
Pinky and Rex is the first in a series of short chapter books about this inseparable pair by acclaimed author James Howe. Accompanied by Melissa Sweet's exuberant illustrations, Pinky and Rex captures perfectly the challenges -- and the rewards -- that true friendship brings.

The Horn Book The characters are appealing and human, and the colorful illustrations are filled with action and detail...showing the gentle warmth of the stories.