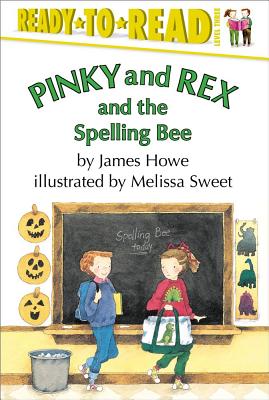 Pinky and Rex and the Spelling Bee (Pinky & Rex) (Hardcover)

Pinky and Rex continue to support each other, even through the worst of times! Readers will love this supportive duo!

Rex is a terrible speller, and she's afraid she's going to embarrass herself in front of the whole class at today's spelling bee. Pinky, on the other hand, is a great speller, and he's sure he's going to be champion of the second grade again.

But Pinky isn't counting on the new kid in class, who's a great speller, too. And he's certainly not counting on embarrassing himself in a way so terrible that winning or losing doesn't even matter. It's a good thing he can count on Rex to make him feel better on the worst day of his life.

Melissa Sweet has illustrated more than eighty children’s books, including the Caldecott Honor books The Right Word and A River of Words: The Story of William Carlos Williams both written by Jen Bryant. She also wrote and illustrated Tupelo Rides the Rails; Carmine: A Little More Red, which was a New York Times Best Illustrated Children’s Book; and Balloons Over Broadway, a picture book biography that was named a 2011 Publishers Weekly Best Nonfiction Picture Book. When she is not in her studio, Melissa can be found taking an art class, hiking with her dogs, or riding her bicycle. She lives with her family in Rockport, Maine.
or
Not Currently Available for Direct Purchase
Copyright © 2020 American Booksellers Association