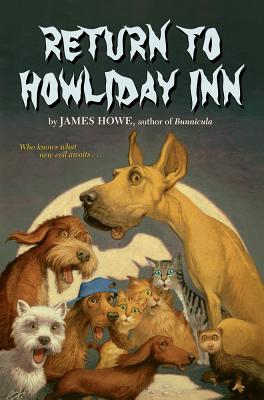 First there is the omen: A relentless rain stops suddenly at 3:00 am and Chester shows Harold and Howie a cat carrier, open and waiting, by the front door. Chester, who has been reading avidly about the paranormal, predicts that they will soon be traveling someplace, and chances are they are not going to like it.
Indeed they are not, as the very next day, with the sun shining bright and clear, the Monroes finally leave for their vacation, dropping Chester, Harold, and Howie off at the scene of some previous harrowing experiences -- Chateau Bow-Wow, the boarding kennel that Chester so aptly had dubbed "Howliday Inn."
And this visit promises to be no less harrowing than the last one. The three are greeted by a whole new group of temporary residents. There's Hamlet, the Great Dane, whose sadness grows deeper with his certainty that his beloved master Archie will never return to pick him up. And Bob and Linda, a pair of yuppie puppies from fashionable Upper Centerville who have been left at Chateau Bow-Wow with a more than adequate supply of gourmet treats, also seem to have been left with a more than adequate supply of worries. Then there are Felony and Miss Demeanor, sinister sisters in crime who pride themselves as cat burglars, and The Weasel who tries almost too hard to make a good impression.
Chester is certain that nothing bodes well and he is right. Unexplained voices, buried bones, a collar with the name Rosebud on it, and a secret code all make for a paranormal experience that none of the guests at Chateau Bow-Wow will ever forget.

"As scrumptiously silly as his critters' earlier adventures." -- Publishers Weekly