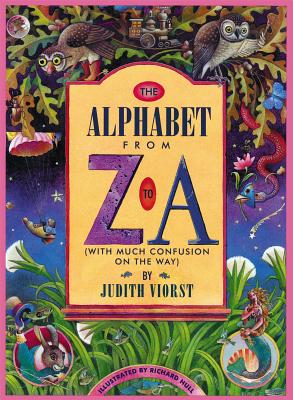 The Alphabet From Z to A (Hardcover)

(With Much Confusion on the Way)

In The Alphabet from Z to A (With Much Confusion on the Way), Judith Viorst once again applies her clear-sighted wit to a subject of universal appeal, turning the traditional alphabet book on its head by going through the alphabet backwards. Viorst's lively verse irreverently demonstrates that the spellings and sounds of our language are often so maddeningly inconsistent -- "blue" and "blew," "chute" and "shoe" -- that, as her exasperated narrator complains, "It could drive you berserk." Aimed at children who already have some facility with language (and at anyone else who likes to play with words), The Alphabet from Z to A is an entertaining and thought-provoking romp through the quirks and quagmires of the English language. Richard Hull's exquisite drawings enrich the text and offer a playful challenge.

Judith Viorst is the author of the beloved Alexander and the Terrible, Horrible, No Good, Very Bad Day, which has sold some four million copies; the Lulu books, including Lulu and the Brontosaurus; the New York Times bestseller Necessary Losses; four musicals; and poetry for children and young adults. Her most recent books of poetry include What Are You Glad About? What Are You Mad About? and Nearing Ninety.
or
Not Currently Available for Direct Purchase
Copyright © 2020 American Booksellers Association