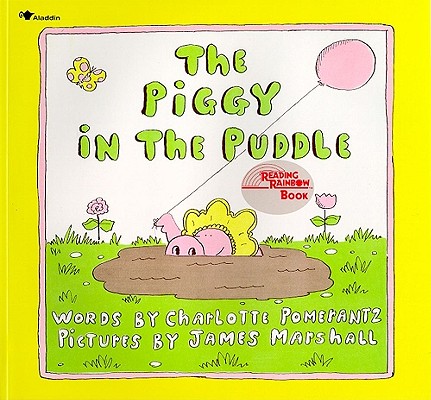 The Piggy in the Puddle

A determined little piggy absolutely refuses to leave her mud puddle in this rollicking book by Charlotte Pomerantz and James Marshall!

Charlotte Pomerantz’s tongue-twisting nonsense verse—made even more hilarious by James Marshall’s illustrations—is sure to delight both children and adults.

Charlotte Pomerantz is the author of thirty-five books for children, including The Piggy in the Puddle. Her books Posy and The Mousery each won Christopher Awards. She lives on an island about thirteen miles long and two miles wide at the mouth of the Hudson River.

James Marshall grew up near San Antonio, Texas, and became an award-winning author and illustrator of more than seventy books. He is best known for his series on George and Martha, the tons-of-fun hippopotamuses; on the mischievous exploits of Fox, a debonair, lazy showoff; and on the misadventures of the Stupid Family. He died in 1992.
Loading...
or support indie stores by buying on
(This book is on backorder)