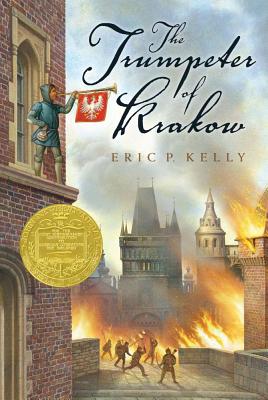 The Trumpeter of Krakow

For well over thirty years, Eric P. Kelly’s Newbery Award winner has brought the color and romance of ancient times to young readers. Today, The Trumpeter of Krakow is an absorbing and dramatic as when it was first published in 1928.

There was something about the Great Tarnov Crystal...Wise men spoke of it in hushed tones. Others were ready to kill for it. Now a murderous Tartar chief is bent on possessing it. But young Joseph Charnetski was bound by an ancient oath to protect the jewel at all costs.

When Joseph and his family seek refuge in medieval Krakow, they are caught up in the plots and intrigues of alchemists, hypnotists, and a dark messenger of evil. Will Joseph be able to protect the crystal, and the city, from the plundering Tartars?

Eric P. Kelly, a student of Slavic culture for most of his life, wrote The Trumpeter of Krakow while teaching and studying at the University of Krakow. During five years spent in Poland he traveled with an American relief unit among the Poles who were driven out of the Ukraine in 1920, directed a supply train at the time of the war with the Soviets, and studied and visited many places in the country he came to love so well. A newspaperman in his native Massachusetts in younger days, Mr. Kelly later wrote many magazine articles and several books for young people. He died in 1960.
Loading...
or support indie stores by buying on