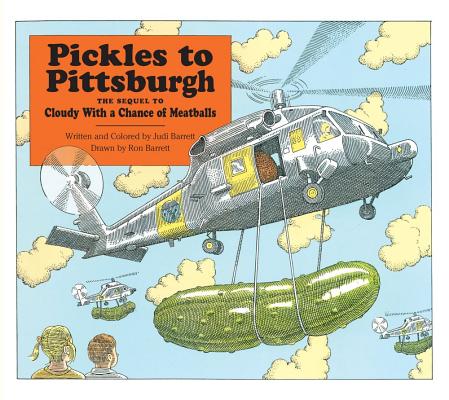 A Sequel to Cloudy with a Chance of Meatballs

In this charming sequel to the classic Cloudy With a Chance of Meatballs, Kate and Henry eagerly await Grandpa's return from a vacation that his postcard says has been one of the best and most unusual ever. Thinking about that postcard Kate drifts off to sleep that night and...
"With Henry as my co-pilot..." she visits the strange land of Chewandswallow -- a land characterized by massive amounts of food, immense carrots, leafy jungles of lettuce, and tuna fish sandwiches so gigantic they have to be moved by helicopter. What the people of Chewandswallow are doing with all that food is most intriguing of all. Fans of Cloudy With a Chance of Meatballs will applaud this return trip with its underlying message of generosity and a world community.

Ron Barrett is the internationally bestselling illustrator of many books for children, including Cloudy With a Chance of Meatballs, Pickles to Pittsburgh, Superhero Joe, Animals Should Definitely Not Wear Clothing, Lots More Animals Should Definitely Not Wear Clothing, and An Excessive Alphabet. His illustrations have been honored by the Society of Illustrators and have been exhibited at The Louvre in Paris. He lives in New York City.
Loading...
or support indie stores by buying on
(This book is on backorder)