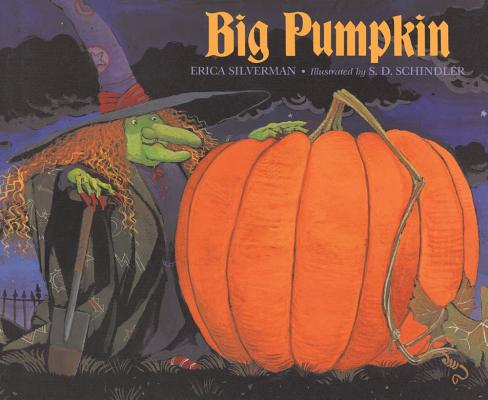 A little bat uses brains over brawn in this not-so-scary Halloween picture book.

The witch has grown the biggest pumpkin ever, and now she wants to make herself a pumpkin pie for Halloween. But the pumpkin is so big she can't get it off the vine.

It’s so big the ghost can’t move it, either. Neither can the vampire, nor the mummy. It looks as if there’ll be no pumpkin pie for Halloween, until along comes the bat with an idea to save the day.

How can the tiny bat succeed where bigger and strong spooky creatures have failed? You'll be surprised!

Erica Silverman is the author of several books including Big Pumpkin; When the Chickens Went on Strike, which was a Sydney Taylor Honor book; and Sholom's Treasure, which won the Sydney Taylor Award and was a runner-up for the National Jewish Book Award. Her books have received the Oppenheim Toy Portfolio Gold Award, the California Young Reader Medal, ABA Pick of the List, and the first book in her early-reader series Cowgirl Kate and Cocoa won the Theodore Seuss Geisel Honor. She lives in Los Angeles, California. Visit her at EricaSilverman.com.

S. D. Schindler is the popular and versatile illustrator of many books for children, including Big Pumpkin and the ALA Notable Book Don't Fidget a Feather, both by Erica Silverman, How Santa Got His Job by Stephen Krensky, and Johnny Appleseed by Rosemary and Stephen Vincent Benét. He lives in Philadelphia, Pennsylvania.
Loading...
or support indie stores by buying on