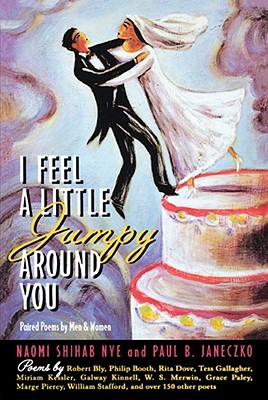 I Feel a Little Jumpy Around You

A Book of Her Poems & His Poems Collected in Pairs

An award-winning anthology of paired poems by men and women.

In this insightful anthology, the editors grouped almost 200 poems into pairs to demonstrate the different ways in which male and female poets see the same topics. How women see men, how boys see girls, and how we all see the world—often in very different ways, but surprisingly, wonderfully, sometimes very much the same.

Paul B. Kaneczko has been a writer, poet, speaker, and teacher and has edited numerous distinguished anthologies for young people, including Poetspeak, an ALA Best Book for Young Adults, the ALA Notable book, The Place My Words Are Looking For, and Poetry from A to Z: A Guide for Young Writers. His third book of poetry is That Sweet Diamond: Baseball Poems. He lives in Hebron, Maine, with his wife, Nadine, and their daughter, Emma.
Loading...
or support indie stores by buying on