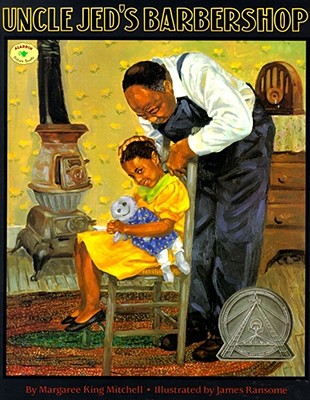 A young girl’s beloved uncle is a talented barber without a shop who never gives up on his dream in this richly illustrated, stirring picture book.

Everyone has a favorite relative. For Sarah Jean, it’s her Uncle Jed. Living in the segregated South of the 1920s, where most people are sharecroppers, Uncle Jed is the only black barber in the county and has to travel all over the county to cut his customers’ hair.

He lives for the day when he could open his very own barbershop. But there are a lot of setbacks along the way. Will Uncle Jed ever be able to open a shiny new shop?

Margaree King Mitchell is the author of the Coretta Scott King Honor Book Uncle Jed’s Barbershop, illustrated by James E. Ransome, and Granddaddy’s Gift. She is the creator of the Everybody Has a Dream program, which empowers students in urban and rural areas to shoot for the stars with aspirations for their lives. Margaree lives in Kansas City, where she is a member of the Midwest Children’s Authors Guild.

James E. Ransome’s highly acclaimed illustrations for The Bell Rang, which he also authored, received the 2020 Coretta Scott King Illustrator Honor. His other award-winning titles include the Coretta Scott King winner The Creation; Coretta Scott King Honor Book Uncle Jed’s Barbershop; Sweet Clara and the Freedom Quilt; Before She Was Harriet, and Let My People Go, winner of the NAACP Image Award. He frequently collaborates with his wife, author Lesa Cline-Ransome. One of their recent titles is Game Changers: The Story of Venus and Serena Williams, which received four starred reviews and was an ALA Notable Children’s Book.  He lives in New York’s Hudson River Valley region with his family. Visit James at JamesRansome.com.
Loading...
or support indie stores by buying on