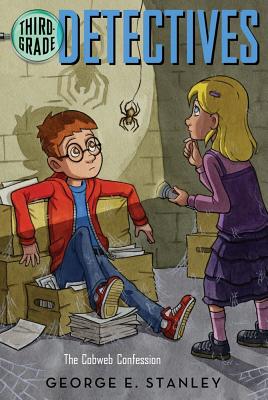 CREEPY, CRAWLY
CRITTERS -- YUCK!
Poor Todd. First he has to give up his room for an old friend of his father's who's visiting. Then his valuable baseball card collection is stolen. Now Mr. Merlin says the class is going to be studying spiders. Todd hates spiders.
But then Mr. Merlin tells the Third-Grade Detectives that a spider's web may help catch the thief. Maybe spiders aren't so bad after all.

Salvatore Murdocca has illustrated more than 200 children’s trade and textbooks. He is also a librettist for children’s opera, a video artist, an avid runner, hiker, bicyclist, and a teacher of children’s illustration at the Parsons School of Design. Sal lives and works in New York with his wife, Nancy.

George Stanley was a Professor of African and Middle-Eastern Languages and Linguistics at Cameron University. In between prepping class lectures and grading papers, he found the time to write for children. He was also the author of Night Fires and the Third-Grade Detectives series.
or support indie stores by buying on