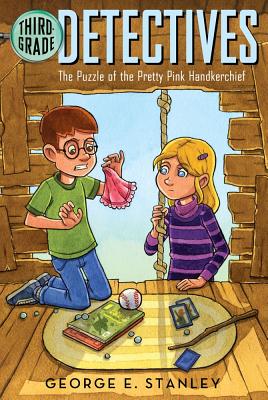 The Puzzle of the Pretty Pink Handkerchief (Third-Grade Detectives #2)

WHO'S BEEN HANGING OUT IN TODD'S TREE HOUSE?
Todd's ears are so clogged up he can't hear, but he doesn't want to miss school. His teacher, the ex-spy Mr. Merlin, is sure to have secret codes for the class to figure out and a new mystery for them to solve.
But the mystery turns out to be in Todd's own backyard. Someone's been in his tree house and left a pretty yucky clue. It's another case for Mr. Merlin's police scientist friend, Dr. Smiley!