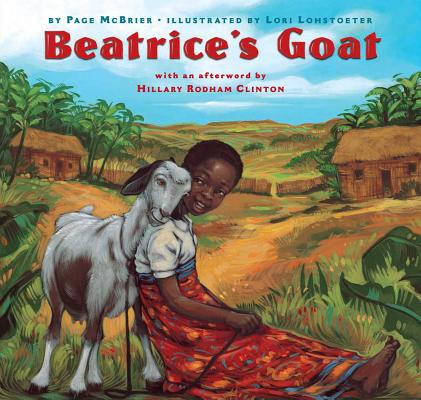 Based on a true story, this heartwarming picture book shows how one gift changed the fate of a poor Ugandan family—especially the young girl who wanted to go to school.

More than anything, Beatrice longs to be a schoolgirl. But in her small African village, only children who can afford uniforms and books can go to school. Beatrice knows that with six children to care for, her family is much too poor. But then Beatrice receives a wonderful gift from some people far away—a goat!

Fat and sleek as a ripe mango, Mugisa (“luck”) gives milk that Beatrice can sell. With Mugisa’s help, Beatrice’s dream may come true after all!

Heifer Project International is a charitable organization that donates livestock to poor communities around the world, giving other families like Beatrice’s a chance to change their lives.

Hillary Rodham Clinton from the afterword Beatrice's Goat is a heartwarming reminder that families, wherever they live, can change their lives for the better.

Page McBrier is a freelance writer and the author of many books for children, including Confessions of a Reluctant Elf and a number of books in the Treehouse Times and the Oliver and Company series, among others. In addition to writing, she has led theater workshops and taught drama in elementary schools. Ms. McBrier currently serves on the board of an arts afterschool program for middle school children. She lives with her husband and their two sons in Rowayton, Connecticut.

Lori Lohstoeter received her BFA from the University of Arkansas and earned her BA in commercial illustration from the ArtCenter College of Design in southern California. Lori was often hired as a children’s book illustrator for her vivid palette and bold brushwork. Her work has been featured on packaging for Estee Lauder, billboards for Jose Cuervo tequila, and more. She is an adjunct teacher for color theory at Norwalk Community College.
Loading...
or support indie stores by buying on