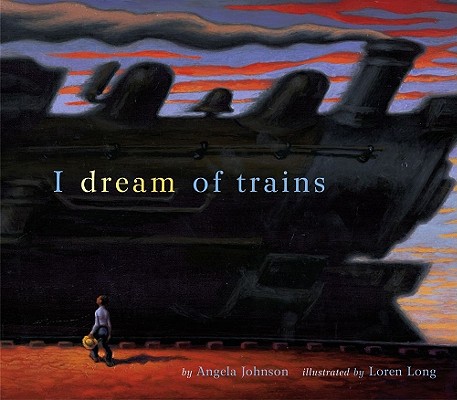 I Dream of Trains

The poignant words of two-time Coretta Scott King Award–winning author Angela Johnson and striking images from fine artist Loren Long join forces in this heartbreaking yet uplifting picture book about a boy, his love for trains, and his adulation of one legendary engineer.

Papa says
it’s the sound of leaving
that speaks to my soul...

A young black boy toils all day long on a cotton field where his one escape is watching the trains go by on the nearby tracks and imagining they’re carrying him somewhere far away—maybe with Casey Jones at the helm. But when the boy loses his hero, will he lose his dream, too?

Loren Long illustrated President Barack Obama’s Of Thee I Sing; the newest version of The Little Engine that Could by Watty Piper; Madonna’s second picture book, Mr. Peabody’s Apples; Nightsong by Ari Berk; Frank McCourt’s Angela and the Baby Jesus; Love by Matt de la Peña; and If I Was the Sunshine by Julie Fogliano. He also wrote and illustrated the Otis series and was part of the Design Garage for Jon Scieszka’s Trucktown series. Loren’s work has appeared in Time, Sports Illustrated, Forbes, The Wall Street Journal, and The Atlantic. He lives with his wife and two sons in Cincinnati, Ohio. Visit him at LorenLong.com.
Loading...
or
Not Currently Available for Direct Purchase