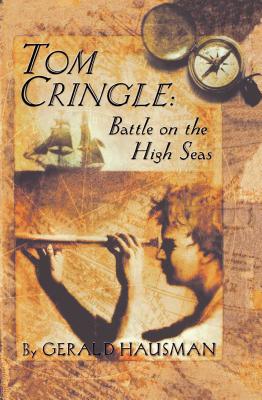 Battle on the High Seas

I, Tom Cringle, two days before my
thirteenth birthday, have made the
decision of my life: to go to sea.
Just two and a half weeks after Tom makes this bold declaration, he sets sail aboard the Bream as a midshipman in England's navy. The War of 1812 is raging, and Tom's ship is headed for Jamaica to patrol the waters against pirates.
Tom finds all the adventure he ever dreamed of -- and then some. Within his first few months as a sailor, he's caught in a life-and-death battle with a mysterious ghost ship, is rescued from a shipwreck by his faithful dog, Sneezer, survives an earthquake, and is kidnapped by Obediah Glasgow, a fierce and dangerous pirate for whom Tom develops an unexpected loyalty.
Tom Cringle: Battle on the High Seas is a fast-paced and gripping story of life on the high seas, of conflicting allegiances, and of finding friends where they are least expected. But most all, it is the tale of a boy who seeks a personal code of honor to guide him through unpredictable and perilous times. Tom's earnest, honest voice and the dynamic and memorable characters he meets make this an irresistible coming-of-age story that will resonate with readers long after they've turned the final page.

Gerald Hausman is a frequent storyteller at college writers programs and at young authors conferences. Recently, he performed at the Young Authors Conference in Kaiserslautern, Germany as a guest of Department of Defense Dependent Schools. His lively presentations, complete with a myriad of sound effects, have earned him praise from storytellers, speakers, writers, and listeners.
Loading...
or support indie stores by buying on