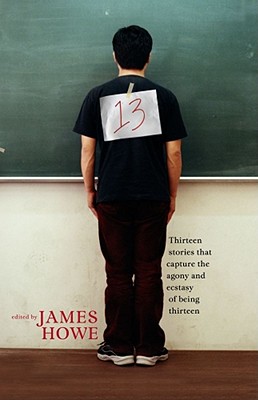 Thirteen Stories That Capture the Agony and Ecstasy of Being Thirteen

If you want to know the truth...
Sometimes I'm not sure who I am anymore."

Thirteen. It's an age of wonder...or dread. The best year of your life...or maybe the worst ever. You've just become an official teenager, even though you're not quite sure you feel like one, but you're no longer a kid, either. Here, from fourteen different points of view, are stories about that wonderful, terrible time. The big bar mitzvah that goes suddenly, wildly, hilariously out of control. A first kiss -- and a realization about one's sexual orientation. A crush on a girl that ends up putting the boy who likes her in the hospital. A pair of sneakers that a kid has to have, no matter what. Written by some of today's finest writers for young adults, these stories -- by turns funny and sad, wrenching and moving -- truly capture the agony and ecstasy of being thirteen.

James Howe is the author of more than ninety books for young readers. Bunnicula, coauthored by his late wife Deborah and published in 1979, is considered a modern classic of children’s literature. The author has written six highly popular sequels, along with the spinoff series Tales from the House of Bunnicula and Bunnicula and Friends. Among his other books are picture books such as Horace and Morris but Mostly Dolores and beginning reader series that include the Pinky and Rex and Houndsley and Catina books. He has also written for older readers. The Misfits, published in 2001, inspired the antibullying initiative No Name-Calling Week, as well as three sequels, Totally Joe, Addie on the Inside, and Also Known as Elvis. A common theme in James Howe’s books from preschool through teens is the acceptance of difference and being true to oneself. Visit him online at JamesHowe.com.
Loading...
or
Not Currently Available for Direct Purchase