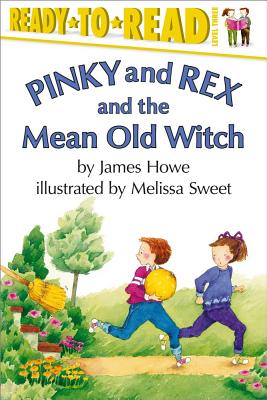 Pinky and Rex and the Mean Old Witch (Pinky & Rex)

Level 3: Reading Alone
From the earliest stages of sounding out words to the excitement of reading a whole book without help, Ready-to-Read books open up a world of possibilities to children at three different levels:
Level 1: Starting to Read
Level 2: Reading Together
Level 3: Reading Alone
Pinky and Rex's neighbor Mrs. Morgan isn't really a mean old witch. But she sure acts like one, yelling and waving her broom around every time the kids step onto her lawn. Now she's taken their ball, just because it accidentally rolled into her yard.
So Rex and Pinky and Pinky's sister, Amanda, come up with the perfect trick to play on the Mean Old Witch. But somehow, seeing Mrs. Morgan sitting all alone in her living room makes Pinky think getting even isn't such a good idea after all. He tries a different plan, with results that surprise the kids as well as their neighbor.