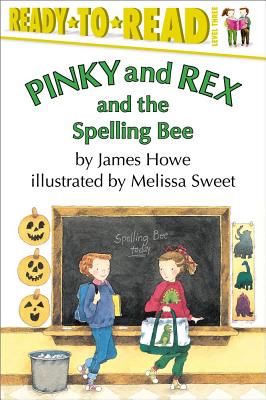 Pinky and Rex and the Spelling Bee (Pinky & Rex) (Paperback)

Pinky and Rex continue to support each other, even through the worst of times! Readers will love this supportive duo!

Rex is a terrible speller, and she's afraid she's going to embarrass herself in front of the whole class at today's spelling bee. Pinky, on the other hand, is a great speller, and he's sure he's going to be champion of the second grade again.

But Pinky isn't counting on the new kid in class, who's a great speller, too. And he's certainly not counting on embarrassing himself in a way so terrible that winning or losing doesn't even matter. It's a good thing he can count on Rex to make him feel better on the worst day of his life.

James Howe is the author of more than ninety books for young readers. Bunnicula, coauthored by his late wife Deborah and published in 1979, is considered a modern classic of children’s literature. The author has written six highly popular sequels, along with the spinoff series Tales from the House of Bunnicula and Bunnicula and Friends. Among his other books are picture books such as Horace and Morris but Mostly Dolores and beginning reader series that include the Pinky and Rex and Houndsley and Catina books. He has also written for older readers. The Misfits, published in 2001, inspired the antibullying initiative No Name-Calling Week, as well as three sequels, Totally Joe, Addie on the Inside, and Also Known as Elvis. A common theme in James Howe’s books from preschool through teens is the acceptance of difference and being true to oneself. Visit him online at JamesHowe.com.
or
Buy Here
Copyright © 2020 American Booksellers Association