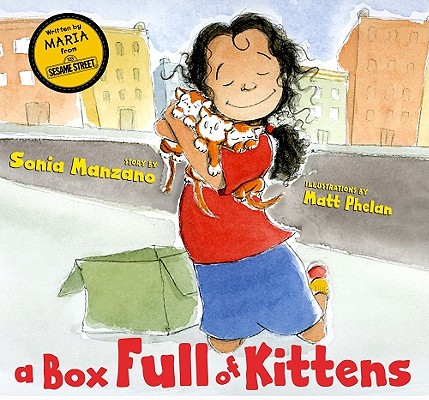 A Box Full of Kittens

And when Ruthie is asked to go spend the afternoon with her aunt, who is about to have a baby any day day now and may need some help., Ruthie seizes the opportunity. It could be her chance to be a hero, should the baby come while she's visiting! But when Ruthie is out fetching a snack for her aunt, she gets so distracted by a box full of kittens in the bodega that she doesn't hear her aunt calling for her, nor does she notice the policemen running to the apartment or the ambulance pulling to the curb. When she realizes what's happened, she's devastated -- she's missed her one chance to be a hero! Or has she?

Sonia Manzano, best known as "Maria" on Sesame Street, once again captures the warmth, love, and adventures of her childhood Bronx neighborhood.

Sonia Manzano is best known as “Maria,” one of the first Hispanic characters on Sesame Street, a role she has delighted in for more than twenty years. She has earned fifteen Emmy Awards as a member of the Sesame Street writing staff, and is the author of the picture books No Dogs Allowed!, A Box Full of Kittens, and the Pura Belpré Award honored The Revolution of Evelyn Serrano. Sonia Manzano lives in New York City with her husband.