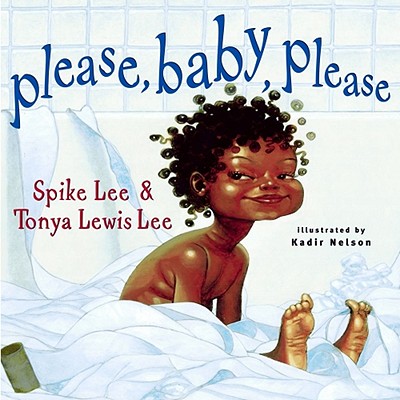 From moments fussy to fond, Academy Award–nominated filmmaker Spike Lee and his wife, producer Tonya Lewis Lee, present a behind-the-scenes look at the chills, spills, and unequivocal thrills of bringing up baby!

Vivid illustrations from celebrated artist Kadir Nelson evoke toddlerhood from sandbox to high chair to crib, and families everywhere will delight in sharing these exuberant moments again and again.

Spike Lee is one of the most prominent and influential media figures today. His films include the critically acclaimed School Daze; Academy Award nominee Do the Right Thing; Malcolm X; Clockers; and 25th Hour. Born in Atlanta, Spike attended Morehouse College and NYU's Tisch School of the Arts, where he earned his master of fine arts degree in film production. Spike and his wife are the authors of Please, Baby, Please, their first picture book with Simon & Schuster. They live in New York City with their two children.

Tonya Lewis Lee is a graduate of Sarah Lawrence College and the University of Virginia School of Law. As a children's television producer she has worked with Disney, Nickelodeon, and Noggin/The N, where she was the executive producer of the award-winning documentary I Sit Where I Want: The Legacy of Brown v. Board of Education and the critically acclaimed miniseries Miracle's Boys. She is also the author of Gotham Diaries, her first novel.

Kadir Nelson is an award-winning American artist whose works have been exhibited in major national and international publications, institutions, art galleries, and museums. Nelson’s work has won the Coretta Scott King Award, the Robert F. Sibert Award, two Coretta Scott King Illustrator Honor Awards, and the 2005 Society of Illustrators Gold Medal. His beloved, award-winning, and bestselling picture books include We Are the Ship: The Story of Negro League Baseball; Thunder Rose, written by Jerdine Nolen; Ellington Was Not a Street, written by Ntozake Shange; Salt in His Shoes, written by Deloris Jordan and Roslyn M. Jordan; and many more. Kadir lives in Los Angeles.
or support indie stores by buying on