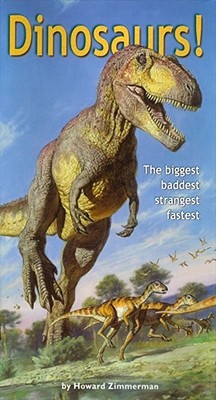 Dinosaurs
Here are those marvelous monsters of the Mesozoic as you've never seen them before
In this colossal collection, you will find dinosaurs larger than houses and dinosaurs as small as cats. Dinosaurs faster than Ostriches. Dinosaurs with 12-inch claws that could rip prey in two. Feathered dinosaurs. Dinosaurs heavier than a dozen African elephants, and dinosaurs more fearsome than T.rex.
Dinosaurs is filled with giant glorious illustrations -- over 75 paintings in all. Created by the world's artists, they capture scientists' latest way of looking at dinosaurs as fast, active, and often deadly creatures. Dinosaurs also features art and information about new and recent discoveries from China, Africa, and South America. Details on each dinosaur family, such as the period and area in which it lived, eating habits, peculiar attributes, a pronunciation guide to all the names, plus a listing of the best places to find out more about dinosaurs on the World Wide Web are also included. Dinosaurs is divided into easily identifiable sections. Whether you are interested in seeing the largest dinosaurs that ever lived, the fastest, or the most deadly hunters, you can turn right to your favorite monsters from the Mesozoic.