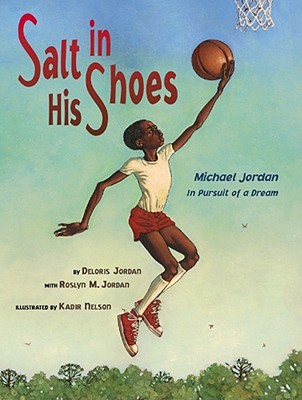 Salt In His Shoes

Michael Jordan in Pursuit of a Dream

Michael Jordan’s mother and sister team up for this heartwarming and inspirational picture book about faith and hope and how any family working together can help a child make his or her dreams come true.

The mere mention of the name conjures up visions of basketball played at its absolute best. But as a child, Michael almost gave up on his hoop dreams, all because he feared he’d never grow tall enough to play the game that would one day make him famous.

That’s when his mother and father stepped in and shared the invaluable lesson of what really goes into the making of a champion—patience, determination, and hard work.

Praise For Salt In His Shoes: Michael Jordan in Pursuit of a Dream…

The Bulletin of the Center for Children's Books A picture-book winner.


Miami Herald The power of myth-in-the-making.

Roslyn M. Jordan is Michael Jordan’s sister and the coauthor, with Deloris Jordan, of Salt in His Shoes and Did I Tell You I Love You Today?. She lives in Chicago.