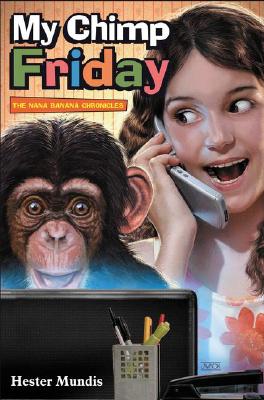 Rachel can't imagine why Bucky Greene, a scientist friend of her father's who's developing genetically engineered bananas, would show up at their New York City apartment in the middle of the night to leave a baby chimpanzee with them for a week -- or why they absolutely, positively can't tell anyone about it. What could possibly be "top secret" about an adorable chimp like Friday?

Rachel hasn't a clue, but when Friday turns out to be really, inexplicably intelligent (Rubik's Cube's a snap) -- and Bucky Greene turns up really, inexplicably dead (he slipped on his own banana peel) -- she suspects serious monkey business afoot. And when chimp-nappers step into the picture, getting to the bottom of Friday's "top secret" before it's too late becomes a delightfully madcap mystery -- with Rachel in a riotous, nonstop race for survival of the fittest.

Written by four-time Emmy-nominated writer and acclaimed humorist Hester Mundis, who raised a chimp of her own in her Manhattan apartment, this is a wonderfully funny -- and heartfelt -- novel about endangered species, corporate espionage, and going bananas in more ways than one.