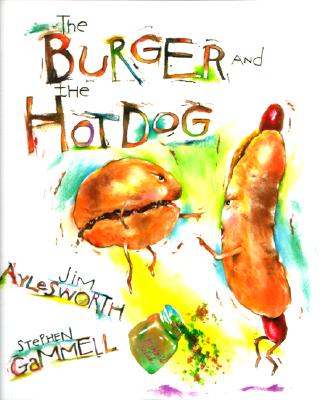 The Burger and the Hot Dog

A burger and a hot dog
One day had a nasty spat.
The burger got insulted
'Cause the hot dog called him flat...

So what happened after that? Well, you'll have to look inside this book to find out. Because, you see, there is a whole world out there in which burgers, hot dogs, sticky buns, ice-cream bars, bologna, popcorn, and all sorts of other food folks exist together and do and go through all the daily stuff we all do. But it's only folks like Jim Aylesworth, together with artist Stephen Gammell, who can bring to us that world in a collection of hilarious rhymes and pictures. After all, what happens when a bunch of sugar cookies give a bagel a hard time, or an ice-cream bar gets stranded on a beach, or a couple of pickles go out dancing?...Well, come on in and see! And when you're done, try to invent some food folks of your own.

Jim Aylesworth has written many books for young readers, including The Completed Hickory Dickory Dock and Mother Halverson's New Cat. Of The Goodnight Kiss, Booklist has said his "melodic story...with its strings of prepositional phrases and its elusive sense of connectedness will mesmerize kids." Mr. Aylesworth marks his proudest accomplishments as having been a first-grade teacher for nearly twenty-five years. He lives with his family in Hinsdale, Illinois.

Stephen Gammell is the beloved illustrator of more than fifty books for children, including Song and Dance Man by Karen Ackerman, which received the Caldecott Medal, and two Caldecott Honor Books: The Relatives Came by Cynthia Rylant, Where the Buffaloes Begin by Olaf Baker, and The Secret Science Project That Almost Ate Our School by Judy Sierra. Mr. Gammell lives with his wife, Linda, in St. Paul, Minnesota.
Loading...
or
Not Currently Available for Direct Purchase