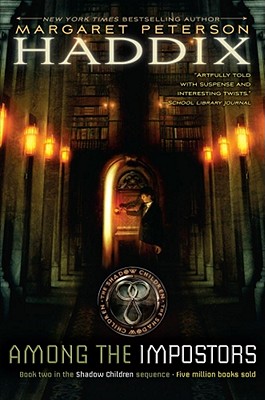 It was awful. All those eyes, all looking at him. It was straight out of Luke's worst nightmares. Panic rooted him to the spot, but every muscle in his body was screaming for him to run, to hide anywhere he could. For twelve years his entire life he'd had to hide. To be seen was death. "Don't!" he wanted to scream. "Don't look at me! Don't report me! Please!" But the muscles that controlled his mouth were as frozen as the rest of him. The tiny part of his mind that wasn't flooded with panic knew that that was good -- now that he had a fake I.D., the last thing he should do was act like a boy who's had to hide. But to act normal, he needed to move, to obey the man at the front and sit down. And he couldn't make his body do that, either. -- from Among the Impostors

Luke Garner is terrified.
Out of hiding for the first time in his life, he knows that any minute one of his new classmates at Hendricks School for Boys could discover his secret: that he's a third child passing as the recently deceased Lee Grant. And in a society where it's illegal for families to have more than two children, being a third child means certain death at the hands of the dreaded Population Police.
His first experience outside the safety of his home is bewildering. There's not a single window anywhere in the school; Luke can't tell his classmates apart (even as they subject him to brutal hazing); and the teachers seem oblivious to it all.
Desperate to fit in, Luke endures the confusion and teasing until he discovers an unlocked door to the outside, and a chance to understand what is really going on. But to take this chance -- to find out the secrets of Hendricks -- Luke will need to put aside his fears and discover a courage that a lifetime in hiding couldn't thwart.
Once again, best-selling author Margaret Peterson Haddix delights her fans with this spine-tingling account of an all-too-possible future. Among the Impostors is a worthy companion to Among the Hidden and a heart-stopping thriller in its own right.

Praise For Among the Impostors (Shadow Children #2)…

"Haddix successfully builds the tension and excitement in this quick-moving, easy-to-read sequel to Among the Hidden."
— VOYA

"Luke and his experiences are believable in this appealing, simple futuristic story. Kids who've read the first book will welcome this one."
— Booklist

Margaret Peterson Haddix is the author of many critically and popularly acclaimed YA and middle grade novels, including the Children of Exile series, The Missing series, the Under Their Skin series, and the Shadow Children series. A graduate of Miami University (of Ohio), she worked for several years as a reporter for The Indianapolis News. She also taught at the Danville (Illinois) Area Community College. She lives with her family in Columbus, Ohio. Visit her at HaddixBooks.com.
Loading...
or
Not Currently Available for Direct Purchase