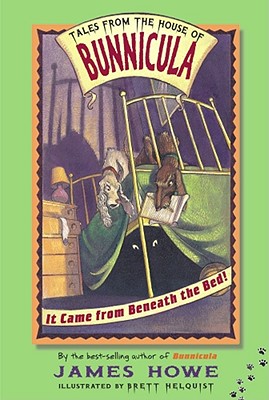 It Came from Beneath the Bed! (Tales From the House of Bunnicula #1)

Dear possible reader of this book,
I want to be a writer, just like my uncle Harold, who wrote a bunch of books about our friend Bunnicula. So I wrote this story. And boy! Did I ever get into trouble! My friend Delilah stopped speaking to me because I put her in my book. Uncle Harold stopped speaking to me because I didn't put him in my book. A writer's life isn't easy!
But back to my story: It's about how a talented and lovable (not to mention smart) wirehaired dachshund puppy named Howie saves the world from a disgusting, evil menace named...oops, that would give away the story. But trust me, this menace is disgusting and evil, all right!!!
Your friend, Howie