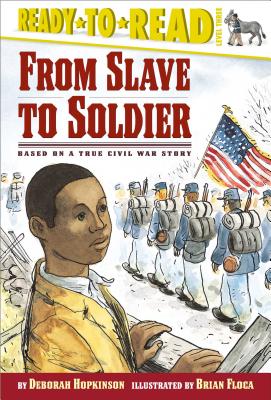 From Slave to Soldier

Based on a True Civil War Story (Ready-to-Reads)

Johnny loves his Uncle Silas and his master's mule, Nell, but he hates being a slave. So when a group of soldiers marches by the farm and asks Johnny if he wants to join the Union Army, Johnny accepts, even though it means leaving Uncle Silas and Nell.
Being a soldier isn't easy. Johnny is given a chance to work with a soldier named Dave and the company's mule team, but he still wonders if he has made the right choice.
Then one night a hungry patrol is out on watch across the river from the camp, with no one to bring them food. Can Johnny handle the mule team all by himself?
This story was inspired by the life of John McCline, who, as a young boy, escaped slavery to serve in the Union Army.

Deborah Hopkinson is the author of numerous award-winning children's books, including Sweet Clara and the Freedom Quilt, winner of the International Reading Association Award, Girl Wonder, winner of the Great Lakes Book Award, and Apples to Oregon, a Junior Library Guild Selection. She received the 2003 Washington State Book Award for Under the Quilt for the Night. She lives in Oregon. Visit her onlinw at DeborahHopkinson.com.

Brian Floca is the author and illustrator of the acclaimed picture books Locomotive, winner of the Caldecott Medal and a New York Times bestseller; Moonshot: The Flight of Apollo 11; and Lightship, each a Robert F. Sibert Honor Book. He is the illustrator of numerous additional books, including Avi’s Poppy series. You can visit him online at BrianFloca.com.
or support indie stores by buying on