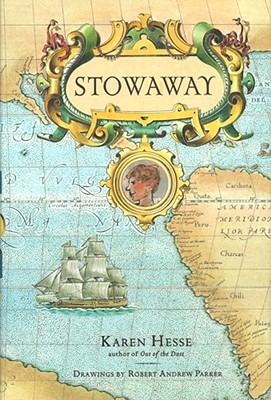 In the summer of 1768, an eleven-year-old butcher's apprentice named Nicholas Young climbed aboard a ship, hid himself from captain and crew, and waited to be carried far away from the life he hated in London.
Nick didn't know it, but the ship he chose -- H.M.S. Endeavour -- was bound for an astonishing adventure. Captained by James Cook, Endeavour was on a secret mission to discover an unknown continent at the bottom of the globe. During his three-year voyage, Nick encountered hardship and was awed by new discoveries; he weathered danger and proved himself brave when disaster struck; he earned the respect and trust of the gentlemen on board; he made a friend for life. And he made history.
An eleven-year-old boy named Nicholas Young really did stow away on Cook's Endeavour. Based on exhaustive historical research and illustrated with evocative drawings by Robert Andrew Parker, Stowaway is Newbery winner Karen Hesse's extraordinary fictional account of the real Nicholas's journey.