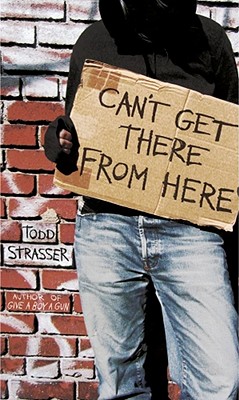 Can't Get There from Here (Mass Market)

Her street name is Maybe. She lives with a tribe of homeless teens -- runaways and throwaways, kids who have no place to go other than the cold city streets, and no family except for one another. Abused, abandoned, and forgotten, they struggle against the cold, hunger, and constant danger.
With the frigid winds of January comes a new girl: Tears, a twelve-year-old whose mother doesn't believe Tears's stepfather abuses her. As the other kids start to disappear -- victims of violence, addiction, and exposure -- Maybe tries to help Tears get off the streets...if it's not already too late.

Todd Strasser has written many critically acclaimed novels for adults, teenagers, and children, including the award-winning Can’t Get There from Here, Give a Boy a Gun, Boot Camp, If I Grow Up, Famous, and How I Created My Perfect Prom Date, which became the Fox feature film Drive Me Crazy. Todd lives in a suburb of New York and speaks frequently at schools. Visit him at ToddStrasser.com.

Praise For Can't Get There from Here…

"Strasser powerfully lays out the desperate realities of living on the street."--Denver Post

"After reading this book, you'll feel as if you spent a few hours in the shoes of a homeless kid."--YM
or
Not Currently Available for Direct Purchase
Copyright © 2020 American Booksellers Association