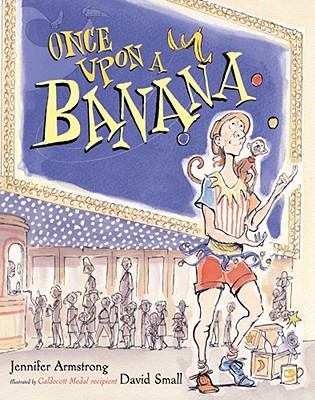 Once Upon a Banana

Such a little banana causing such a big pile of trouble! How could it be? First the grocer, then the painter, next the bicycle messenger, and then -- oh, no -- not the baby in the carriage! An entire town turned upside down, all by a banana peel!

Caldecott Medal-winning artist David Small and award-winning author Jennifer Armstrong have created a roller-coaster ride of a picture book told in rhyming street signs that will tickle and delight readers from beginning to end and over and over again.

Praise For Once Upon a Banana…

Jennifer Armstrong is the author of numerous award-winning picture books and novels. Her works include Hugh Can Do and Chin Yu Min and the Ginger Cat (both ALA Notable books); The Dreams of Mairhe Mehan (a BCCB Blue Ribbon Book); and Black-Eyed Susan (a New York Public Library Best Book). Her first novel, Steal Away, was an ALA Best Book for Young Adults, an ALA Notable book, and a Golden Kite Honor book. Other titles include Pockets, Shipwreck at the Bottom of the World, Magnus at the Fire, Photo by Brady, and Once Upon a Banana. She lives in New York State.

David Small is the Caldecott Award–winning illustrator of So You Want to Be President? by Judith St. George. He also received Caldecott Honors for The Gardener by Sarah Stewart and One Cool Friend by Toni Buzzeo. He’s illustrated dozens of other award-winning books, including That Book Woman by Heather Henson and The Underneath by Kathi Appelt, and lives in Michigan with his wife, Sarah Stewart.
Loading...
or support indie stores by buying on