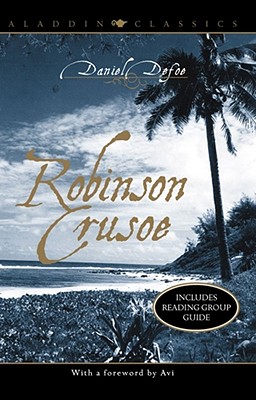 Defoe’s classic story of adventure and survival as a shipwrecked Englishman finds himself stranded on a deserted island.

After a fierce storm at sea, Robinson Crusoe is marooned on an uncharted island, with only a few bits of his wrecked ship’s flotsam and jetsam to sustain him. For more than two decades, he faces the wrath of nature and the struggle to stay alive with little more than his wits to save him. Then, following an encounter with cannibals, a tribesman named Friday becomes Crusoe’s only ally. As their relationship develops, the line between servant and friend begins to blur, and the possibility of freedom for them both at last looms on the horizon.

Daniel Defoe (1659–1661) was an English writer and journalist most widely known for his novel Robinson Crusoe, originally published in 1719. His work varied from political pamphlets to poetry, and included other novels such as Religious Courtship and The Political History of the Devil. He lived in London, England.

Avi is the author of more than seventy books for children and young adults, including the 2003 Newbery medal winner Crispin: The Cross of Lead. He has won two Newbery Honors and many other awards for his fiction. He lives with his family in Denver, Colorado. Visit him at Avi-Writer.com.
Loading...
or
Not Currently Available for Direct Purchase