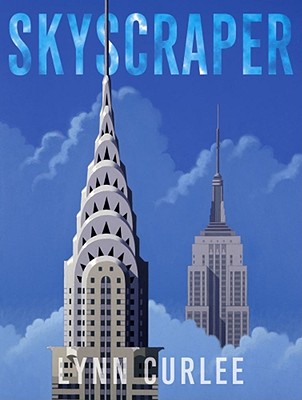 Did you know that it took ten million bricks to build the Empire State Building?

Did you know that residents of the John Hancock Center sometimes have to call down to the doorman to find out the weather on the streets below?

Did you know a building in Dubai is planned to be nearly one half mile high?

In Skyscraper, Lynn Curlee delves into one of man's endless fascinations -- building as high in the sky as possible.

From the the Empire State Building to the Chrysler Building, to the Sears and Hancock Towers, to the Petronas Towers in Kuala Lumpur, to the World Trade Center, Curlee captures all the drama, excitement, and tragedy of man's attempt to reach ever closer to the clouds. Skyscraper details the history of these monuments to ambition, science, and curiosity, beginning with their origins at the Pyramid of Giza and the Eiffel Tower and then moving to New York (the skyscraper capital of the world), Chicago, Boston, and finally to the skyward expansion that is spreading across the globe.

Lynn Curlee, who received a Robert F. Sibert Informational Honor Book Award for Brooklyn Bridge, comes from a family of intense sports fans. His other books include Liberty, Ships of the Air, Into the Ice: The Story of Arctic Exploration, Rushmore, The Seven Wonders of the Ancient World, Capital, and, most recently, Parthenon. He lives on the North Fork of Long Island, New York.
Loading...
or
Not Currently Available for Direct Purchase