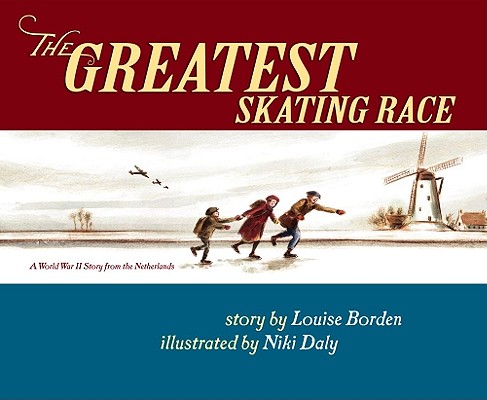 A World War II Story from the Netherlands

"You're a strong skater, Piet, and you have a quick mind. This is why I know you'll succeed in this important task. I wouldn't ask you to do this if I didn't know it could be done."
In 1941 Piet, a young Dutch boy from Sluis, gets the assignment of a lifetime: He must skate along the frozen canals of the Netherlands and across the Belgian border, in order to guide two neighborhood children to their aunt's house in Brugge, where the children will remain for the duration of World War II. Their father has been taken by German soldiers, and the children are no longer safe in Sluis -- but the journey with Piet, past soldiers and enemies, is fraught with danger.
Along the treacherous path to Belgium the three children skate using every bit of speed, courage, and strength they can muster. All the time they try to appear like innocent schoolchildren simply out for a skate, for if the German soldiers discover their escape plan, the children will be in grave trouble. During the journey Piet thinks about his hero, Pim Mulier -- the first person to ever skate the Elfstedentocht, the famous and prestigious Eleven Towns Race that takes place in his country. For years Piet has dreamed of proving that he is a skater as brave and strong as Pim Mulier -- but he had never imagined that his test would fall under such dangerous circumstances.
Louise Borden's moving text captures all the tension, excitement, and fear that comes with Piet's mission, while Niki Daly's evocative illustrations bring the children and their perilous journey into vivid focus.

Louise Borden graduated from Denison University with a degree in history. She taught first graders and preschoolers and later was a part-owner of a bookstore in Cincinnati, Ohio. In addition to writing children’s books, she also speaks regularly to young students about the writing process. Her books include Good Luck, Mrs. K!, which won the Christopher Medal, and The A+ Custodian. She lives in Cincinnati, Ohio, and you can visit her at LouiseBorden.com.

Niki Daly is an award-winning author and illustrator of numerous picture books, including Not So Fast, Songololo. He lives in Cape Town, South Africa.
Loading...
or support indie stores by buying on