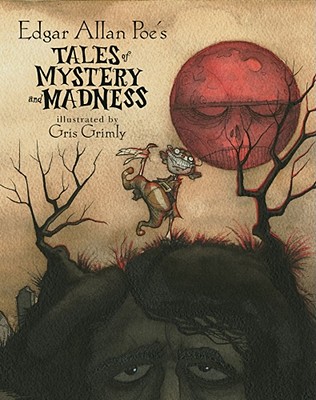 “Be very scared, as these are the best of Poe's chilling tales of horror. Creep show illustrations from master Grimly add to the macabre. Not for the faint at heart, these are best suited for readers 10 and older.”
— Maureen Palacios, Once Upon a Time, Montrose, CA
View the List

A sweet little cat drives a man to insanity and murder....
The grim death known as the plague roams a masquerade ball dressed in red....
A dwarf seeks his final revenge on his captors....
A sister calls to her beloved twin from beyond the grave....
Prepare yourself. You are about to enter a world where you will be shocked, terrified, and, though you'll be too scared to admit it at first, secretly thrilled. Here are four tales -- The Black Cat, The Masque of the Red Death, Hop-Frog, and The Fall of the House of Usher -- by the master of the macabre, Edgar Allan Poe. The original tales have been ever so slightly dismembered -- but, of course, Poe understood dismemberment very well. And he would shriek in ghoulish delight at Gris Grimly's gruesomely delectable illustrations that adorn every page. So prepare yourself. And keep the lights on.

Praise For Edgar Allan Poe's Tales of Mystery and Madness…

Roger Corman Filmmaker, The Little Shop of Horrors The macabre beauty and sly wit of Gris Grimly's illustrated edition of some of Poe's best-loved tales are destined to capture the imagination of a generation new to the master of terror, as well as delight longtime admirers of Poe, who will find much to relish in this haunting interpretation.

Edgar Allan Poe (1809-1849) was an American writer, poet, and critic.  Best known for his macabre prose work, including the short story “The Tell-Tale Heart,” his writing has influenced literature in the United States and around the world.

Gris Grimly lives in Pasadena, California, where he runs the Mad Creator Studio. He is also the illustrator of the New York Times bestselling The Dangerous Alphabet by Neil Gaiman, Edgar Allan Poe’s Tales of Mystery and Madness and The Legend of Sleepy Hollow. He also wrote and illustrated Gris Grimly’s Wicked Nursery Rhymes. You can learn more about him at www.madcreator.com.
Loading...
or support indie stores by buying on