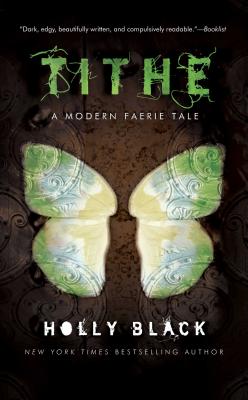 Welcome to
the realm of
very scary
faeries!
Sixteen-year-old Kaye is a modern nomad. Fierce and independent, she travels from city to city with her mother's rock band until an ominous attack forces the sixteen-year-old back to her childhood home. There, amid the industrial, blue-collar New Jersey backdrop, Kaye soon finds herself an unwilling pawn in an ancient power struggle between two rival faerie kingdoms -- a struggle that could very well mean her death.
Newcomer Holly Black's enormously powerful voice weaves teen angst, riveting romance, and capriciously diabolical faerie folk into an enthralling, engaging, altogether original reading experience.

Annette Curtis Klause author of Blood and Chocolate and Silver Kiss Not only are the descriptions of our world and the world of Faery crisp, delicious, and detailed, but the characters are intriguing and complex, also. I like that these are feral, amoral faeries and not the tame, innocent Victorian version, and that the teenagers aren't tame, either.
or
Buy Here
Copyright © 2020 American Booksellers Association