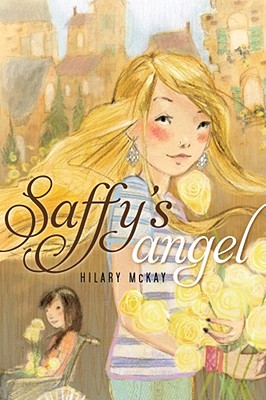 Those of you who have read Hilary McKay's earlier books, among which are The Exiles, Dog Friday, and Dolphin Luck, will happily welcome her new story, Saffy's Angel. Whether you have read her work or not, you have a special treat in store in Saffy's Angel.
You'll meet the four Casson children, whose mother, Eve, a fine-arts painter, has given them the names of paint colors. Cadmium, called Caddy, is the eldest; then comes Saffron, known as Saffy; Indigo, the only boy; and Rose, the youngest. When Saffy discovers quite by accident that she has been adopted, she is deeply upset, though the others assure her it makes no difference at all. Saffy is the daughter of Eve's twin sister, who lived in Siena, Italy, and died in a car crash. Grandad brought Saffy, as a very small child, back from Siena.
At Grandad's death, he leaves something to each of the children. To Saffy, it is "her angel," although no one knows its identity. How Saffy discovers what her angel is, with the help of an energetic new friend, lies at the heart of this enchanting story. Unforgettable characters come alive in often deeply humorous and always absorbing events to make a book to be treasured for a long, long time.