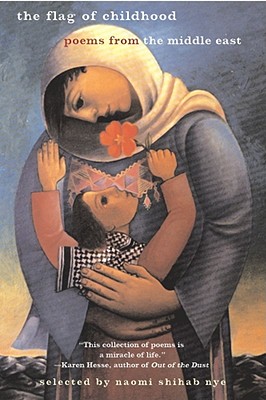 The Flag of Childhood

Poems From the Middle East

A stirring anthology of sixty poems from the Middle East selected by honored anthologist, writer, and editor Naomi Shihab Nye.

This beautiful collection of eloquent poems from Palestine, Israel, Egypt, Iraq, and elsewhere open windows into the hearts and souls of people we usually meet only on the nightly news. What we see when we look through these windows is the love of family, friends, and for the Earth, the daily occurrences of life that touch us forever, the longing for a sense of place. What we learn is that beneath the veil of stereotypes, our human connections are stronger than our cultural differences.

Naomi Shihab Nye is an award-winning writer and editor whose work has appeared widely. She edited the ALA Notable international poetry collection, This Same Sky, and The Tree Is Older Than You Are: Poems and Paintings from Mexico, as well as The Space Between Our Footsteps: Poems and Paintings from the Middle East. Her books of poems include Fuel, Red Suitcase, and Words Under the Words. A Guggenheim fellow, she is also the author of the young adult novel Habibi, which was named an ALA Notable Book, a Best Book for Young Adults, and winner of the Jane Addams Children’s Book Award as well as the Book Publishers of Texas award from the Texas Institute of Letters. Naomi lives in San Antonio, Texas, with her husband, Michael, and their son, Madison.
Loading...
or support indie stores by buying on