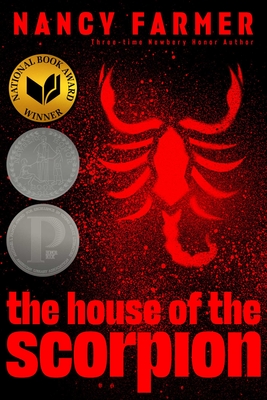 The House of the Scorpion

Discover this internationally bestselling, National Book Award–winning young adult classic about what it means to be human with an updated, reimagined cover!

His DNA came from El Patrón, the drug-lord ruler of the country of Opium. Most people hate and fear clones like Matt—except for El Patrón. El Patrón loves Matt as he loves himself, because Matt is himself.

As Matt struggles to understand his existence, he is threatened by a sinister cast of characters, and realizes escape is his only chance to survive. But escape from the Alacrán Estate is no guarantee of freedom.

Praise For The House of the Scorpion…

“It's a pleasure to read science fiction that's full of warm, strong characters . . . that doesn't rely on violence as the solution to complex problems of right and wrong. The House of the Scorpion is a pleasure to read.”
— Ursula K. LeGuin

“A story rich in twists and tangles, heroes and heroines . . . and often dazzlingly beautiful descriptive prose.”
— The Boston Globe

* “Farmer's novel . . . hits close to home, raising questions of what it means to be human, what is the value of life, and what are the responsibilities of a society. Readers will be hooked from the first page.” - Publishers Weekly, starred review

Nancy Farmer has written three Newbery Honor books: The Ear, the Eye and the Arm; A Girl Named Disaster; and The House of the Scorpion, which also won the National Book Award and the Printz Honor. Other books include The Lord of Opium, The Sea of Trolls, The Land of the Silver Apples, The Islands of the Blessed, Do You Know Me, The Warm Place, and three picture books for young children. She grew up on the Arizona-Mexico border and now lives with her family in the Chiricahua Mountains of Arizona.
Loading...
or support indie stores by buying on
(This book is on backorder)