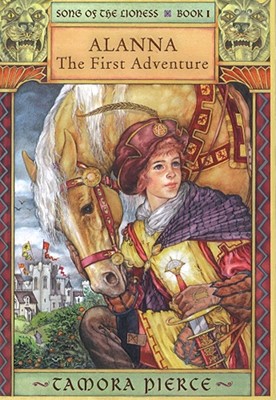 "From now on I'm Alan of Trebond, the younger twin. I'll be a knight."

In a time when girls are forbidden to be warriors, Alanna of Trebond wants nothing more than to be knight of the realm of Tortall. So she finds a way to switch places with her brother, Thom. Disguised as a boy, Alanna begins her training as a page at the palace of King Roald. The road to knighthood, as she discovers, is not an easy one. Alanna must master weapons, combat, magic -- and also polite behavior, her temper, and even her own heart. With stubbornness, skill, and daring, she wins the admiration of all around her, and the friendship of Prince Jonathan of Tortall himself. But she also makes an enemy of the prince's uncle, the powerful and charming Duke Roger....

Filled with swords and sorcery, adventure and intrigue, good and evil, Alanna's first adventure begins -- one that will lead to the fulfillment of her dreams and the magical destiny that will make her a legend in her land.