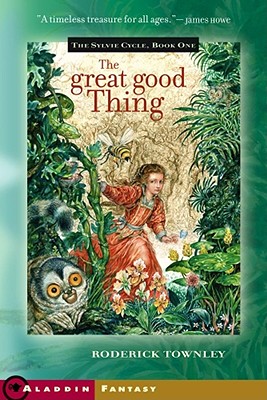 Sylvie had an amazing life, but she didn't get to live it very often.
Sylvie has been a twelve-year-old princess for more than eighty years, ever since the book she lives in was first printed. She's the heroine, and her story is exciting -- but that's the trouble. Her story is always exciting in the same way. Sylvie longs to get away and explore the world outside the confines of her book.
When she breaks the cardinal rule of all storybook characters and looks up at the Reader, Sylvie begins a journey that not even she could have anticipated. And what she accomplishes goes beyond any great good thing she could have imagined...

Praise For The Great Good Thing…

James Howe I read the first sentence of The Great Good Thing, and it was love at first sight. Here is a stunningly original story, full of beautifully crafted words, ideas that crackle with intelligence, and characters who literally step off the pages and into the readers' minds and hearts. A timeless treasure for all ages.

Roderick Townley's first book about Sylvie, The Great Good Thing, was a Top-Ten Book Sense Pick, praised by Kirkus Reviews as "utterly winning...a book beloved from the first page." Its sequel, Into the Labyrinth, was hailed by the New York Times as "a hopping fine read." The present volume completes the Sylvie cycle.

Mr. Townley has also published the novel Sky, described by VOYA as "one hell of a book," as well as volumes of poetry, nonfiction, and literary criticism. He has two children, Jesse and Grace, and is married to author Wyatt Townley.
Loading...
or support indie stores by buying on