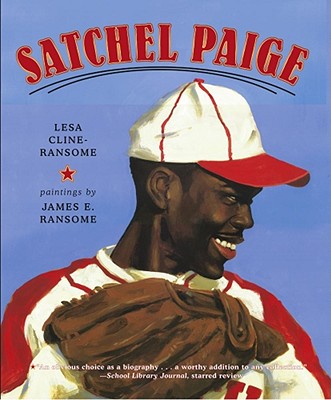 No one pitched like Leroy “Satchel” Paige. Fans packed the stands to see how many batters he could strike out in one game. He dazzled them with his unique pitching style, and he even gave nicknames to some of his trademark pitches—there was the “hesitation,” his magic slow ball, and the “bee ball,” named because it would always “be” where he wanted it to be.

Follow Satch’​s career through these beautiful illustrations as he begins playing in the semi-pros and goes on to become the first African American to pitch in a major League World Series, and the first Negro Leaguer to be inducted into the Baseball Hall of Fame.

James E. Ransome’s highly acclaimed illustrations for Before She Was Harriet received the 2018 Coretta Scott King Illustrator Honor. His other award-winning titles include the Coretta Scott King winner The Creation; Coretta Scott King Honor Book Uncle Jed’s Barbershop; Sweet Clara and the Freedom Quilt; and Let My People Go, winner of the NAACP Image Award. James is also a recipient of the ALA Children’s Literature Legacy Award. He frequently collaborates with his wife, author Lesa Cline-Ransome. One of their recent titles is Game Changers: The Story of Venus and Serena Williams, which received four starred reviews and was an ALA Notable Children’s Book. James is a professor and coordinator of the MFA Illustration Graduate Program at Syracuse University. He lives in New York’s Hudson River Valley region with his family. Visit James at JamesRansome.com.
Loading...
or
Not Currently Available for Direct Purchase